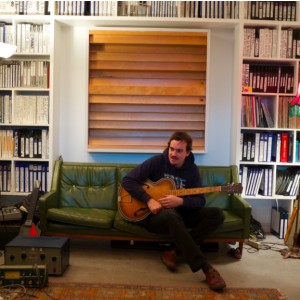 RAPstation (Kyle Eustice): When did you get into music and what particular aspect of it drew you in?

Leon Michels: I’ve been playing music since the 3rd grade. I had good teachers and supportive parents, so I was lucky in that way. Since then, I’ve pretty much always known that music is what I wanted to do.

Where did you grow up and how did your environment shape your musical tastes?

I grew up in upstate New York until I was 10 and then my family moved to Manhattan. When I moved to New York City was when my musical taste started to develop. As a kid, for the most part, I was listening to mainstream Hip Hop, but I was also obsessed with early jazz like Sidney Bechet and Duke Ellington. New York was and probably still is one of the best places to grow up because not matter what your into, you’ll find someone around you into the same shit.

How did you discover Wu-Tang Clan?

The first time I heard Wu-Tang, I was at my grandma’s apartment and I saw the video for “Mystery of Chessboxin” on The Box, an all Hip Hop video channel. Watching that video was like watching aliens take over your TV screen. I’d never heard or seen anything like it. It blew my mind and I still remember it vividly.

What first gave you the idea to do Wu-Tang instrumentals?

We were approached by Scion to play behind Raekwon for a concert series they had [2005], which paired up live bands with MCs. I would’ve never thought that it would be a good idea, ‘cause I’m not a huge fan of live Hip Hop. We approached the songs more from the sample source and added instrumentation and production elements that made it sound more like old school soul. RZA’s beats are too good to try and just copy, so we had to flip them so it would be different enough to be interesting.

Wu-Tang clans are pretty diehard. Were there any fears going in as to how it would be perceived?

When the first record came out I was scared that would be the case. I really had no idea how people would react. I think real fans of them are just stoked to hear the songs they love interpreted in different way. The fact that the Wu songs work so well instrumentally is a testament to how compositionally strong the beats are. People over the years have asked me to cover other Hip Hop songs, but a lot of classic Hip Hop are just soul loops that don’t make for good covers. When we deconstructed the songs to try and figure out how to play them live, sometimes it would end up sounding like some ‘60s Albert Ayler record or an outtake from The Taking of Pelham 123. A lot of the samples are layered and in different keys. Also, the Enter The Wu-Tang (36th Chamber) is sonically, in my top three records of all time. The way it was recorded—it’s muddy and has a haze to it, but you can still play it next to anything modern and it holds up. RZA is a genius. He’s in my list of top three producers of all time along with Lee Perry and Tom Wilson.

I love the idea and every song you've done is incredible and immediately recognizable. Have you had any cosigns from actual members? If so what did they say?

When I was recording the first one, our studio was next door to a Hip Hop studio where RZA was recording the Afro Samurai soundtrack. I played him “Duel of The Iron Mic”  and he said, ‘That sounds like American music.’ I took it as a compliment.

Why did the follow-up to the first album take so long?

I’ve been busy recording different types of music and producing other bands records. I moved into a new studio with three of my friends two years ago. We’re all collectors of instruments, tape machines, outboard gear, etc., so when we pooled together our gear and built a new studio, I felt like the follow-up to Enter the 37th Chamber would be a perfect project to break in the studio and experiment with new instruments and new recording techniques.

What's a love show like? Do you plan on touring?

If anyone wants to offer us a a lot of money, I’m down. But outside the handful of shows we did with members of Wu-Tang, we haven’t really played live as El Michels Affair for a while.

Are you going to tackle any other Hip Hop group's material in the future?

I don’t think so. The next record will be original material.

How many people did it take to properly execute the new album?

There are about four key players, including myself  that played on the majority of the record. It’s the same people I share my studio with—Thomas Brenneck, Nick Movshon, and Homer Steinweiss.  And then some are musicians that added stuff here and there.

What does the music you make mean to you?

Music is something I have to have some connection with everyday — whether it;s making it or listening to it for inspiration. I’ll get itchy if I go a few days without making music. I’m just constantly trying to keep myself interested by trying new things, whether it’s the style of music or the way its recorded. It’s a cliche, but I feel like I really do learn something new every time I make music.

Also, it’s amazing to me how much is out there that you’ve never heard that could change everything you think about music tomorrow. That’s why I love collecting and digging for records. I like certain music I’ve recorded a lot better than others, but I like the idea of releasing a lot of music. Each one is like a time capsule and could be discovered 20 or 30 years later the way that I’ve discovered records that were totally passed over when they came out.